Discover How You Get In Your Own Way

My nephew, my niece and I were at a little community skating rink by their house. My nephew was angry, frustrated, and wanted nothing more than to go home. My niece on the other hand was just having a little rest before she tried again. They were both trying to learn to skate but were having two very different experiences.

It made me realize that sometimes it’s how you view a situation that causes all the problems. You get in your own way and it’s a struggle when it doesn’t need to be. 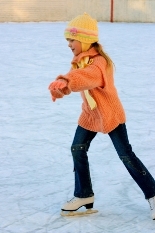 I asked my niece the exact same questions. Her answers were dramatically different. When she was out on the ice she thought about “how to skate like the other kids”. She even showed me how she was trying to make her skates glide like the people who could skate. She also said skating was “fun”.

So, same situation but one was loving it and the other wasn’t. And, not surprisingly, my niece was learning much faster than my nephew.

I'm telling you this story because I think it’s a really good representation of how if you’re struggling with an issue, it may actually be due to what you’re focusing on and what beliefs you have about it. You’re like my nephew and getting in your own way without really realizing it.

So, how do you stop struggling with your own issues? Follow these two steps:

It’s a matter of paying attention to what you’re focusing on the next time you’re feeling stressed. Are you focusing on what you don’t want (falling) or what you do want (learning how to skate)?

Sometimes you just need to take a step back and remember the big picture. You need to remind yourself of what is it that you’re really trying to achieve. That way, when you do meet an obstacle, it’s not going to slow you down. You’ll be focusing on where you want to go and not the obstacle. You’ll be watching how others do it and then figuring out how you can do it too. You’ll also be far more motivated to take action when ideas and people appear to help you.

Only concentrating on not failing means you’re getting in your own way of success. You end up focusing on the wrong thing. As long as you’re focused on what you don’t want, you’re not seeing what you need to do in order to be successful.

So, remember, the first key is to ask yourself, “What do I want?”.

The second step is that you need to figure out your beliefs. This can be truly life altering. Things you struggled against for years can suddenly disappear when you realize it’s how you’ve been thinking that’s been causing you all the problems.

Your beliefs have caused you to behave in a way that makes you struggle when there's no need. You'll suddenly find that you no longer procrastinate or use distractions like the tv, smoking, drinking, or shopping to quiet that uneasy feeling you used to have.

To help with figuring this out, the next time you suddenly hear yourself say something negative, write it down.

If you’re using words like “always", "never", "everyone", "no one", or "all” that will be a pretty good clue that you’re dealing with a negative belief.

Now, be happy and celebrate what you've just done. You've taken a huge step which most people will never be willing to take. Instead of just letting beliefs that you haven’t been fully aware of determine your experiences, you are about to take control of your life. You have a choice about what you believe but you can’t make the decision until you’re aware of what you’re telling yourself.

Next, it doesn’t matter if the belief is true or not. You just want to be aware of it and then you want to decide whether it’s causing you to struggle.

Write it down on a piece of paper under the category of “Old Belief”. Then in the next column write down, “New Belief” and write down thoughts that would help you get what you want. For example:

Even if you don’t quite truly believe your new belief, whenever you catch yourself saying the old belief, tell yourself the new one. Or you could try imagining the situation the way you’d really like it to be. See yourself having coffee with Joan and having a good laugh together.

By doing this you’re programming your mind to believe something that is going to help you as opposed to hindering you. You will also be able to spot when your thoughts are preventing you from taking action. Previously you would have been trapped in believing there was nothing you could do (it's hopeless, no one ever listens) but now you'll know that's not what you want nor what you believe.

It’ll take practice but very soon your new belief will become your new reality. By shifting your thoughts, you will also be creating solutions instead of remaining stuck struggling with a situation you don't want.

How To Stop Struggling Recap

So, the next time you’re struggling with an issue, take the time to take a step back and ask yourself:

You may be surprised by what’s really consuming your thoughts.

Change your focus and you’ll completely change the situation. You’ll be amazed at how well this works.

So, what are you focusing on?

If you're struggling, you're moving in the wrong direction
Oprah Winfrey

Back to "Confident Thinking" main page