Changing core beliefs can sound like a daunting task if it's a way of thinking that you've had for a long time. But it isn't really.

If you've just come from reading my article, "Why do these things keep happening to me? How your thoughts create your reality", you've probably come to the realization that you have some core beliefs that may be causing you to constantly seek approval from others and are basically hindering you from achieving what you really want. You're not alone. We all have some deep thought processes that we eventually realize are no longer relevant to our current lives.

Here are 5 strategies on how to change your old core beliefs: 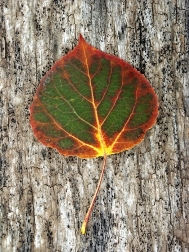 1. Changing Core Beliefs - Make Sure You Have The Right One

Sometimes, the core belief you think you have isn't really the one that's causing the problems. For example, you might think you're a really positive person but in reality what you're saying to yourself and those around you could be quite negative.

One way to really determine what your true core belief is to notice what you say to yourself during times of great stress. Do you say, "See, I'm unlovable", or "See, I can't do this". That's the core belief you need to change.

Also, look at the world around you. What is happening? Are there any patterns you see? For example:


Once you see the pattern, then ask yourself what you think about that issue. Maybe, "Money is a struggle", "I'm not good with people" or "I'm not important".

Listen to yourself. Once you figure it out, then turn it around. Ask yourself:

Next, you're going to re-program yourself. 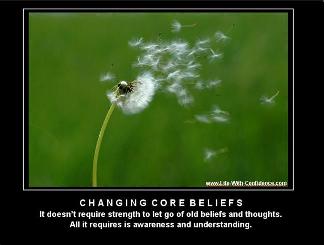 Once you've completed Step 1, then awareness is the next step to changing core beliefs. Simply observe how you behave and you'll soon see the results that you're creating for yourself. Changing those old patterns becomes much easier when you see it's been due to how you were thinking, reacting, and behaving. Sometimes, just the sudden understanding of why you react the way you do is enough to let go of old thought processes. If simply being aware of what your core belief is isn't enough then whenever you have the thought say, "Cancel" to yourself. Cancel that thought. It's no longer true for you. As soon as you think that thought, release it, and think of your new belief. It could be something like, "I am capable of doing anything I put my mind to." It's a matter of being aware of when you have your old thought and replacing it with your new one. If you can, also be aware of what triggers your old thought. Remember, these old beliefs were originally created to keep you safe. You no longer need them to do that for you. One other thing to remember is that nothing has any meaning until you give it a meaning. You are the only one who gives meaning to anything and everything in your life. You have the power to put a new meaning on some aspect of your life. This will change your life because you're seeing it in a completely new way.

If you have a core belief like "I'm unlovable" or "I don't deserve anything" then a very effective way of working on re-programming this core belief is to use a mirror. Look at yourself in the mirror and say something like, "I am lovable, I am completely and wonderfully lovable." Smile at yourself while you're saying it. If you feel like you don't deserve money, you could try writing yourself a cheque and hand it to yourself in the mirror. At first, you may not even be able to look at yourself in the eye and it may feel really, really uncomfortable. Keep trying. Every time you do it, it will get easier and each time, your subconscious begins to believe it a little bit more. For some people, changing core beliefs like this happens quickly and for others, sometimes it can take a few months. It does work though. One other mirror affirmation to try is what a man called Emile Coue suggests. Emile Coue stated back in the early 1900's that if you looked in a mirror, three times a day, and said to yourself three times, "Every day, and in every way, I am getting better and better", that your life would dramatically change for the better. As he says, "Our subconscious is entirely reprogrammable by this simple positive sentence." It puts your imagination into gear and it starts your subconscious believing that things really will go better and then because you have this belief, your life just naturally does get better and better. There's numerous testimonials that it does work. Give it a try, it's easy to do and the words are easy to remember. The added benefit of doing this is it'll put you in a good mood.

Discover who you know with the core belief you want and then hang out with them. How do they think? What do they tell themselves? What do they believe? You can then say the same things to yourself. For example, if you want to have a healthy relationship, you need to believe what will get you that. "My relationships are healthy and based upon mutual respect." Think exactly like the person who already has that. The goal isn't to just copy them or pretend to be that person, it's more about learning from the experts, listening to new ideas, seeing new ways of thinking and then working to incorporate those ideas into your own beliefs. You'll still be you but you will have grown your mind to include this new thought process. If you don't know anyone then find a book (could be self help or an autobiography or even just one with strong characters) or a movie or tv show or an online forum, anywhere, where the thought process you want is discussed or used.

5. Keep Doing It Until You've Got a New Core Belief

At first when you're working on changing core beliefs, you may find it hard to believe your new thought. You might say to yourself, "I'm so very lovable" but that voice in the back of your head keeps saying, "Yeah, right" Remember that it's your past experiences which have provided you with this core belief. Many times, it was created in order to keep you safe and to protect yourself from more pain and suffering. Know that this isn't true. You're safe without that old thought. It doesn't serve you anymore and you can change it. Here's another suggestion from Tony Robbins,

"All personal breakthroughs begin with a change in beliefs. So how do we change? The most effective way is to get your brain to associate massive pain to the old belief. You must feel deep in your gut that not only has this belief cost you pain in the past, but it's costing you in the present and, ultimately, can only bring you pain in the future.Then you must associate tremendous pleasure to the idea of adopting a new, empowering belief."

Keep working on changing those old, outdated beliefs. It might happen within days or it might take months. No matter how long it takes, you're worth it and you're worth taking the time and effort to create the new core belief which will allow you to reach your goals.

Some tools I think might be useful to you when you're working on changing core beliefs are:

How Do I Stop Caring What Others Think Of Me?
This is one of my ebooks which I've written to provide you with everything you need to stop needing approval from others. Format: pdf file , ebook only