When you get into a time of great stress, what keeps you going?
A sense of duty? Fear of failure? Or the sheer joy of doing what you're doing?
Your answer to that question will determine the quality of your entire life. Don't blow it.
Charles Burke from "Acres of Opportunities"

When I was in grade 4, I very seriously (yet with great excitement) told my teacher, “I’m going to be a writer when I grow up.” I expected him to mirror back my enthusiasm with “great”, or “way to go”. Instead, he replied, “There’s no money in that. You’ll end up starving.” It was like a huge pin being stuck in my birthday balloon. I was instantly deflated. What I’d been so excited about accomplishing with my life was now a waste of time and not only that I’d end up penniless and starving in the streets. My young mind was now in turmoil. Maybe it wasn’t such a good idea after all. Even though my inner voice said it was wrong, I decided I’d have to listen to my teacher and do something else with my life as writing was obviously a mistake. It was a huge disappointment for me but I knew my instructor wouldn’t lie to me.

Throughout my life, I have come across many other people who would also mirror my instructor’s sentiments with “There’s no money in writing”. I have tons of books on how to write and a large number of them start off with “There are very few people who can make a living by writing.” They would always reinforce the sentiments that I’d heard all those years ago. I can’t be a writer because there’s no money in it.

I still always had an interest in writing and every once in a while the desire to write would break down my resistance of knowing it was the “wrong” thing to do. I would end up buying more books on how to become a great writer. But, I never believed I could do it because I knew “there’s no money in it”.

It’s only recently that I realized that I was letting a limiting belief be placed upon me. I was letting this myth I’d heard all my life become true in my mind.

How many limiting beliefs have you let be placed upon you just like this? The things we are told as children tend to stick with us forever. The good news is that our deepest desires also tend to stay with us for life. We just seem to be better at denying our inner voice describing our greatest dreams and end up believing the limiting beliefs.

If you have a deep desire that you’ve been stuffing down for years because you were told something like I was, here’s 4 main reasons why you need to listen to your inner voice and not be influenced by outside forces:

1. It’s Very Narrow and Closed Minded
To say for anything, “There’s no money in it” is a mistake. If all authors had believed that then there'd be no Stephen King, no Joanne Harris’ (one of my favorite writers right now, she wrote Blackberry Wine: A Novel

, no Shakespeare, no Hemingway, none of the truly great authors. There would be no writers at all. These people didn’t listen to anyone and it led them to their success.

Take a look at the stories on the Inspirational Page, the majority of these now famous people, at one time had to ignore the people who said they couldn’t do it for some reason or that it was just a bad idea.

2. There’s Always More Than One Option
If there's something you absolutely love doing, there will be numerous options of what you can accomplish with it. Take writing. My teacher instantly assumed I meant I wanted to be a novelist. But there are so many other forms of writing. If there were no writers (because we all believed it was a bad career choice) there would be no movies, no t.v. shows, no newspapers or magazines, no speeches, no advertisements, and no instruction manuals. A novelist is just one tiny part of the whole writing world. That’s the way it is with any passion. You'll find you can use it in so many different ways. As you explore your interest, you open new and exciting doors for yourself. We also have no idea what technology will bring us in the future. My grade 4 instructor had no idea that the internet would even exist at some point in the future and that this would be another avenue for “writers”.

Someone who illustrates this point really well is a Japanese woman named Marie Kondo. She says since the age of 5, her passion has been tidying and organizing. I'm sure her parents didn't see any possible career with that except maybe possibly being a maid or something like that. Even now when she tells people what she does, they reply, "Can you actually make money doing that?" Yet, she's been able to create a very successful career for herself from that passion. She's developed an organization method called KonMari, she's written a best selling book called The Life-Changing Magic of Tidying Up: The Japanese Art of Decluttering and Organizing

, her speaking engagements sell out within hours, and there's a 3 month waiting list to become an actual client. It's a really great book, by the way. I highly recommend it. It's enabling me to finally conquer the clutter in my home.

3. Money is Not the Right Focus
One time when I was visiting Hawaii, I went through a little market that had been set up in a parking lot. There was one stall that stood out for me. It had beautiful silver jewellery. I bought one of the bracelets and while talking with the artist, she told me she was really a lawyer but that she’d never really enjoyed it and had suddenly decided to follow her passion for making silver jewellery. The joy and enthusiasm from this lady was amazing. Yes, she’d given up a pretty much guaranteed good salary but she was so much happier now. She said everyone had told her she was crazy for what she was doing. She continued on that she’d just gotten her jewellery into a local boutique and her sales were taking off. By following her passion, she was still going to be able to make a “good” living yet enjoy her life so much more than doing what was “expected” of her.

Too many people are stopped in their tracks because they’re told there’s not enough money in a particular field. So, instead they choose to be lawyers or doctors or something else where there’s supposed to be money for your efforts. Too often though the person ends up with that career but not happy. Money cannot bring you happiness. If you follow your passion, the money will come. You will probably be far happier even if you are making less than spending your whole life in a job that does not fulfill you.

4. You’re Letting Someone Else Make Your Life Decision For You
We all have destinies or things we want to explore in our time on this earth. By listening to these comments, we are letting someone else tell us how we should live our life. Resentment, frustration, and always that feeling that “maybe if you’d tried” will most likely be the final result. Or you will always feel somewhat unfulfilled. You may have a new career but you’ll always wonder or feel like there’s something you should have done. You are the only one who knows what you really have an interest in. You owe it to yourself to follow what brings you fulfillment and joy. Isn’t that what life is for?

Society loves to tell us how to live our lives and what’s best for us but we’re the only ones that truly know what is the true path we’re supposed to follow. Don’t ever let the myths deter you. Dig deep down inside you, recall those dreams of the past and follow your passion. You’ll never regret it. 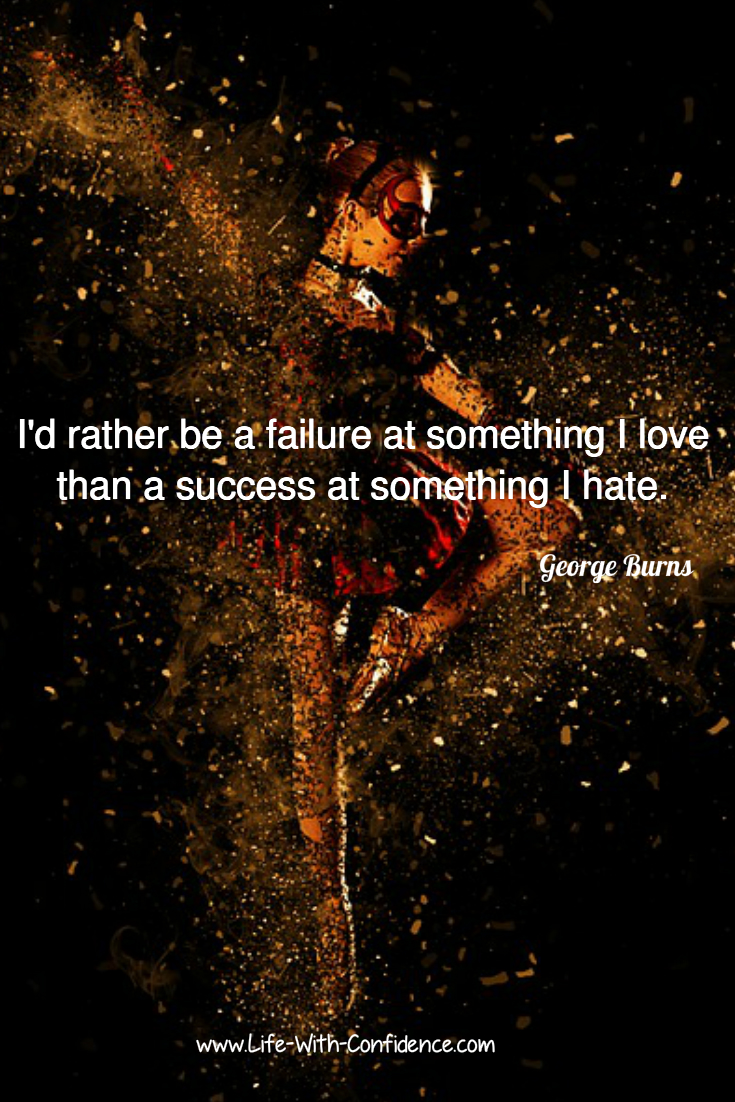