Confidence Tips - Self Limiting Beliefs
"No Thanks, That Doesn't Suit Me"

Man is what he believes.
Anton Chekov

He was told he was too small and too slow to make it in the NHL.
This person is now considered one of the greatest hockey players that has ever lived. I’ll tell you who this person is in a moment but first let’s take a look at the labels we place on ourselves. 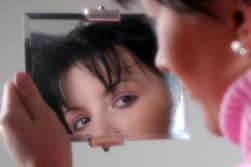 We all have things we believe about ourselves. Every time you look in the mirror, that's probably all that you can see. You believe that you're too tall, you’re too short, you're beautiful, you’re ugly, you’re a fast learner or a slow learner, or something like you're too sensitive. You get the idea. They are the basic beliefs that you carry around with you every day and they affect how you view the world and how you feel about yourself.

When is the last time you took a look at your list of beliefs and thought about whether they’re really true or not? A lot of the labels we’ve given ourselves are simply because someone said it and we believed it. It didn’t matter if it was really true or not, we believed it and we continue to believe it. For example, were you ever told in school that you’d never be any good at something so you stopped doing it even if you liked it? I used to like to play basketball but someone said, “You’re too short to play basketball.” So, I stopped playing because I thought I was a failure before I’d even started. I was too short. It was an insurmountable obstacle. A lot of times it’s that offhand comment that someone makes that we internalize and it ends up changing our life. Usually, not for the better. It’s very sad when we let a careless comment like this change our view of ourselves forever.

The real truth is that you don’t have to accept any label that anyone tries to put on you. You wouldn’t wear shoes that were two sizes too small, so why do we think we have to wear other people’s opinions? We don’t. When you hear someone make a comment like that, simply say, “No Thanks, that doesn’t suit me.”

It’s your life to live and if you want to do something or have an interest in something, you should explore it to its fullest no matter what anyone else thinks. Make your own labels. Rip off those old ones and replace them with brand new ones. Do it now, RIPPPPP!!!! Off they come. You don't need them anymore. They’re old and outdated. It’s a new you and you deserve to feel fantastic. So, go ahead, off with the old and in with the new.

I know it’s not always that easy. But, it does help to know that our labels are created by us and we are the only ones that can peel them off and stick on new ones. It’s definitely a decision we need to make when these outdated ideas prevent us from being the best we can be.

And the mystery hockey player who was told that he would never make it in the NHL was none other than Wayne Gretzky. He didn’t accept that self limiting thought from someone else and you don’t have to either. Just remember, “No Thanks, that doesn’t suit me.”

Be the master of mind rather than mastered by the mind.
Zen Saying

Back to Top of "Self Confidence Tips - Self Limiting Beliefs"