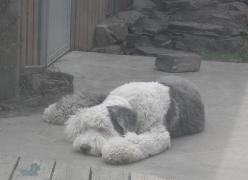 Barney the dog sad at the thought of no walk today

I learnt a valuable lesson from my dog, Barney, today.
That’s him to the left. It wasn’t the usual cliché of “enjoy every moment” or “be happy” that you usually hear people say they learn from their pets. No, it was far more profound than that.

I’d been in an almost car accident earlier in the week. I say “almost” because when the other car suddenly turned left in front of us, my husband hit the brakes fast enough to avoid the crash. I still ended up with a very sore neck and just not feeling all that well.

And, because of this, I didn’t feel up to taking Barney for his daily walk. I would ask my husband to take him later. So, I put him outside and he just lay down and looked as sad as only a dog can look.

It was at this moment that I had the sudden realization what this situation truly meant. When I was a child, my parents were so very busy all of the time and didn’t have a lot of extra time for me and my two brothers. I used to think that I as the youngest child definitely got the short end of the stick in the time department but I’m sure they treated us all equally. Let me confess a secret here, as a child, I internalized the fact that they weren’t spending a lot of time with me as meaning that I wasn’t good enough. I somehow thought that if I was just smarter or funnier or nicer or something, then they would spend more time with me. I remember sometimes resenting them for not being there when I felt I really needed them. But, I thought they weren't going to help me because I wasn't good enough.

Looking at Barney today, I understood it had nothing to do with how good I was. It had everything to do with what my parents were going through at the time. I could have been the most amazing child in the world they still would have had all the same demands placed on their time. They did the best they could at the time. When I think about it, I really have no idea what they were going through as I only saw the situation through the eyes of a child. I can imagine all the stress they were dealing with but I can never know for sure.

Louise Hay says in her book, "You Can Heal Your Life"

“The innermost belief for everyone I have worked with is always, ‘I’m not good enough’”.

How much of that have we created ourselves simply because we haven’t been willing to see a situation from any other viewpoint except our own?

Barney, still a puppy, can be quite the challenge sometimes but there’s no doubt as to whether he’s good enough. How well behaved he is that day has nothing to do with whether I spend time with him or not. I feel guilty for not always spending the time I know I should with him but he doesn’t know that. And, how much attention he gets that day has everything to do with how I’m feeling and what’s happening from my view of the world.

The true light bulb moment for me was when I suddenly realized that I’d let a situation that wasn’t even about me, create a big part of my self image. An image that I’ve blindly carried throughout most of my life. My feelings of never being good enough were entirely of my own making. I was the one who chose what the event would mean. No one else decided that for me. On the positive side, it means I can also choose to let it go and to allow the meaning to finally change. Powerful stuff. This becomes even more powerful when I ask myself, “how many other events have I mistakenly chosen to form a negative self image for myself?”

When you're a child, you're trying to determine your worth in the world. How people treat you is how you tend to judge your value. The sense of not being good enough can truly affect your whole life. It will always prevent you from allowing the good things in the world to be a part of your life. You will always self sabotage yourself because you don't feel that you deserve them or you're not good enough to have them. The ultimate truth though is that you don't have to think that way anymore. As Barney showed me, it's a thought I created about myself for something that wasn't even real. You can change that thought and replace it with a far more truthful reality. You are worth it. You are very much worth it.

The one other amazing part of all this is that I discovered this truth from my dog, Barney. Not bad for a dog that insists on trying to destroy everything I own. Pretty cool that this time instead of ruining my treasures and keepsakes, he was able to destroy some of my limiting beliefs.

This all seems obvious when you think about it but to me this was a huge breakthrough. It’s a brand new way for me to look at past events. The demons in those old beliefs are vanishing as they see the light of a new viewpoint. 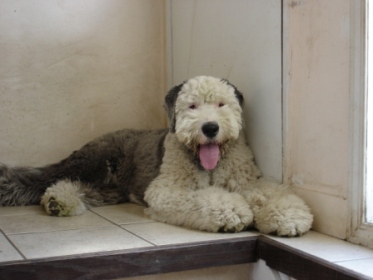 Barney much happier after his walk

Anyway to thank Barney I took him for that walk through the park. It was the least I could do for having been provided with such great insight which will not only forever change how I view my childhood, it will give me greater confidence as I move forwards in my life because I know I am good enough.

We don't see things as they are, we see them as we are.
Anais Nin

Back to "All Articles"