How Do You Deal With Failure? 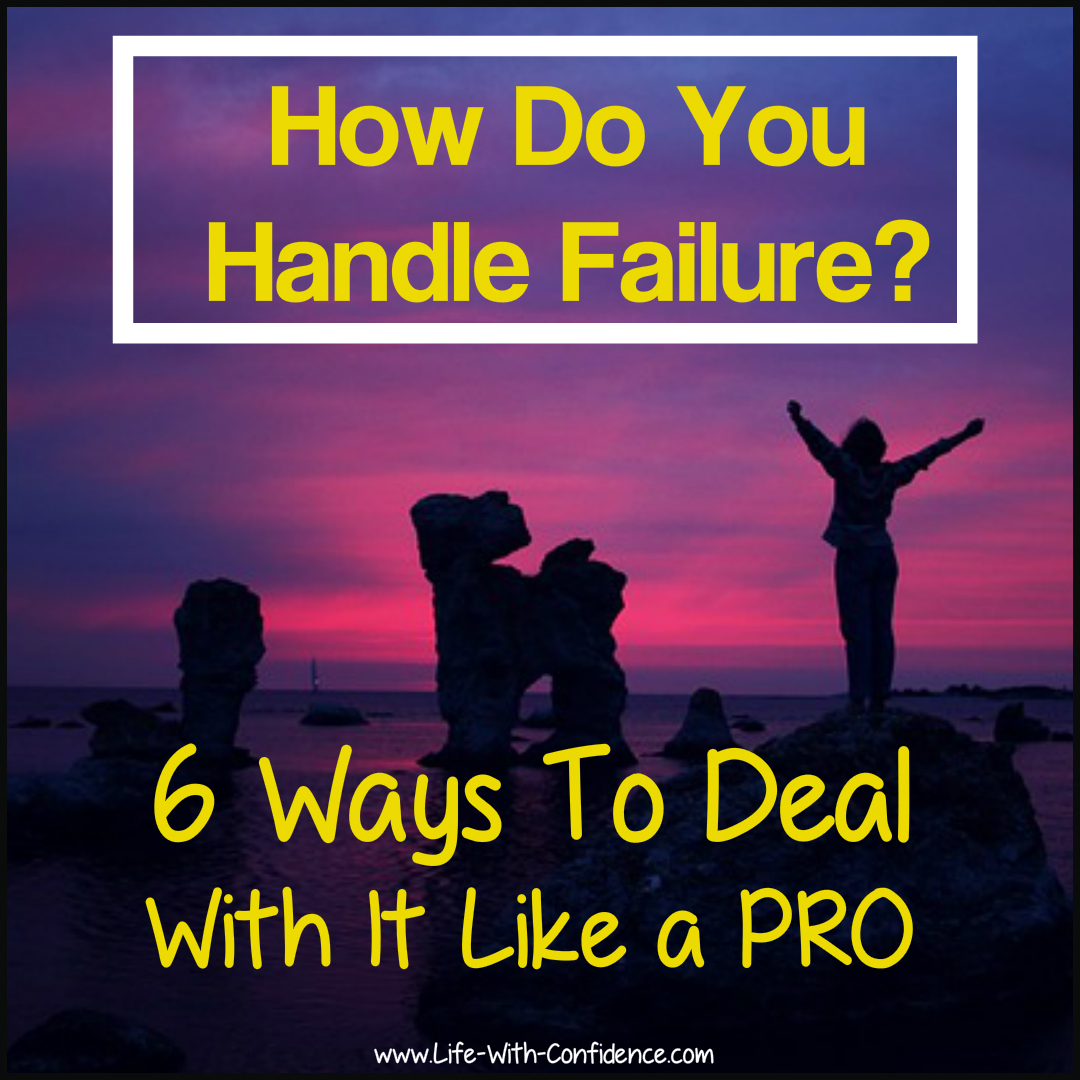 You imagine it in your mind, all the things that might go wrong.

It'll be awful, it'll be embarrassing, no, it'll be humiliating.

The sick feeling in your stomach spreads.

There's no doubt about it, the fear of failure is one of those situations that can cause terror in even the most confident people out there. No one likes to fail and it can feel absolutely devastating anytime it happens.

But, the truth is that if you're living your life at all, you're going to encounter failure at some point along the way. So, let's look at 6 ways you can handle failure like a pro so that not only will you easily bounce back, you won't worry so much about it happening in the first place.

Instead, you'll simply deal with it and get moving again towards your success.

YouTube started out as a dating site and it failed at that. Can you even imagine now there not being a YouTube?

What does ‘failure’ mean to you? This is an important one to figure out as it's your beliefs around failure that will determine how you react when it happens.

Your fear of failure may have started back when you were in school. Back then, when you didn't have the understanding you do now, you might have told yourself "Only the dumb kids fail at school" and felt that  no one wants to hang around with the kid who gets F's and no one wants to have to deal with the lack of respect from your parents when you bring home an unacceptable report card.

It can also feel like society looks down on those who fail. You'll see it on TV and in movies and you'll also hear slogans like:

With all that going on, it's no wonder that people fear failing.

So, take a moment and think about whether any of these thoughts have crept into your belief system and define what failure means to you. Does it mean that your friends and family lose their respect for you? That you’re a loser and worthless in the eyes of everyone else?

If this is what you consider failure to mean then it's time to change your belief and update your definition about failure.

Instead of seeing the situation as hopeless or a waste of time, change your belief to see it as valuable experience. You've grown and gained fantastic  knowledge from what happened. You can now use that new wisdom to launch yourself closer to your success. See failure as sometimes being a necessary stepping stone on the path towards success.

The only way you become good at something is by correcting your mistakes and becoming more proficient at it. Think of someone who plays a musical instrument. They had to start with learning the most basic of musical notes, making mistakes when they played those notes, adjusting their movements to play the note correctly, and they built up their skills from that. It took a lot of practice but they finally achieved their goal of being a successful musician but they couldn't have done it if they hadn't simply corrected their mistakes as they learned to play the instrument.

Did you know that entrepreneurs tend to fail 3.8 times before they hit on a successful business? Henry Ford is a perfect example in that he had two car businesses fail before he started the Ford Motor Company at age 53. And even then, he had more failures after that with his well known disaster of Fordlandia in Brazil.

The truth about success is that it's only gained through experience which means going through a process of trial and error.

The more you fail, the more you learn what needs to be done in order to achieve success.

Positive reframing means that instead of focusing on what failed, focus on what went right. Take a step back and look at the situation from a different perspective. Some things you could do are:


Basically, learn to look for the good that happened. Find those silver linings in every bad situation.

See also, "The Game of Opposites - How To Deal With Frustration"

Resistance comes in the form of ridicule.

It comes in the form of rejection.

It comes in the form of self-doubt.

It’s your job to keep going.”

When failure happens, and it will, first, accept that failures happen to everyone, not just you. It's not personal against you because everyone has to deal with failures at various times. It doesn't mean you're a failure, it means that something you tried didn't work. There's a difference.

Next accept that you made a mistake or misjudged a situation. It’s not about blaming someone else or something. It's about learning how you can improve yourself.

Perhaps you need to admit that you need more knowledge or training in this area. If so, that’s definitely something you can do.

Or maybe you took on too much. You’ve now learned your limitations or that you need to enlist help.

You've learned some valuable lessons with this experience so be sure to use that knowledge in a way that will allow you to move forwards even smarter than before.

Also, accept the fact that the first time you encounter a situation or try something new, you're not going to know the best ways to do it. You'll do the best you can with the knowledge you have at the time but it may not be enough and you may fail. That's okay. It means you'll know much more for the next time you're in a similar situation.

Failing at something you had high hopes for is painful. It's okay to feel upset about it. Allow yourself to feel all those emotions, which are wrapped up with feeling like you failed, fully and completely.

But also make the decision that you will only allow yourself to feel these emotions for a certain amount of time, maybe for the next 24 hours. After that then you tell yourself, "Enough. Time to get going again."

The next step is to take a step back and refocus on the big picture. What is your ultimate goal?

Maybe this failure was really a distraction from what you really wanted. Is this just a minor setback? if you deal with the immediate problems can you get your project back on track? How do you start again to go after your goal? Start thinking about how to move forwards again.

4. Develop a Sense of Humor 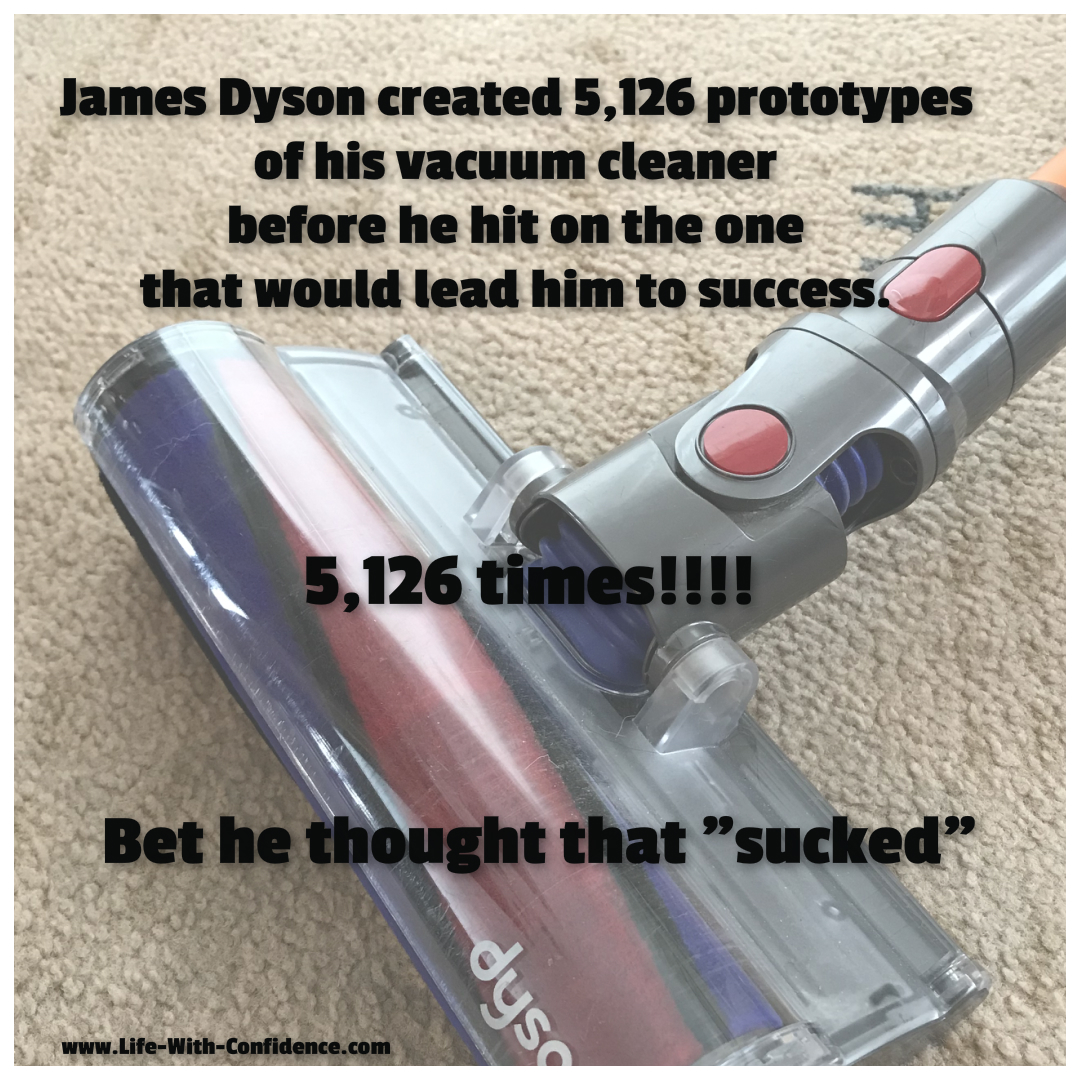 Have a sense of humor about it if you can. Not always easy but it helps tremendously if you can find the humor in the situation. This failure is just temporary. You will bounce back.

If James Dyson can create that many prototypes and go on to become worth over $4.6 billion from his vacuum cleaner business, you can keep going too.

5. Understand That Failure Doesn't Define You

You are not your failures. What defines you is how you react to that failure. Do you learn from it and keep going or do you let it crush you forever?

The worst you can do is let a failure start to creep in as doubt about yourself and make you gun-shy about trying anything else in the future.

And, the absolute worst thing you can do is declare defeat before you even start by thinking something like, "That'll never work" or "I don't want to risk looking dumb in front of my friends."

Remind yourself that some of the most successful people in the world have failed numerous times. To read about some people who didn't achieve success on their first attempts,  see "Inspiring Stories". 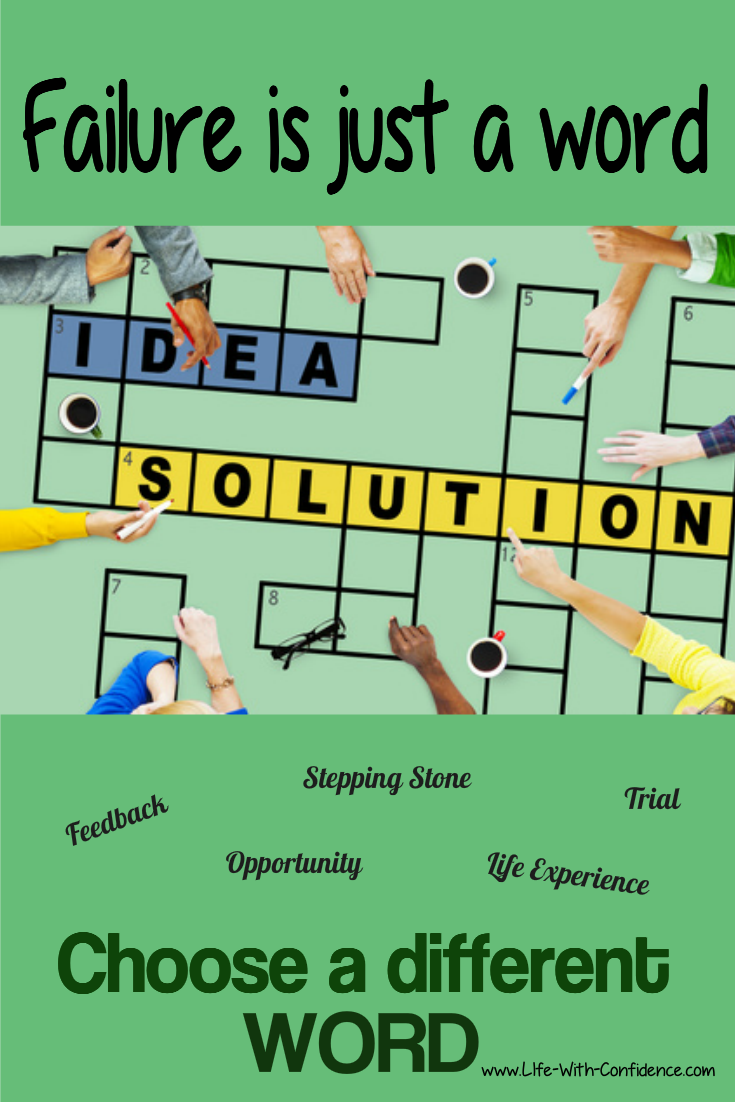 Failure is simply a word you attach to a particular situation.

Change the word to be:

Change the word and you'll change your perspective.

It's no longer a failure, it's only a situation that needs some modifications.

Quotes To Remember About Failure

I'll leave you with two excellent quotes about failure: 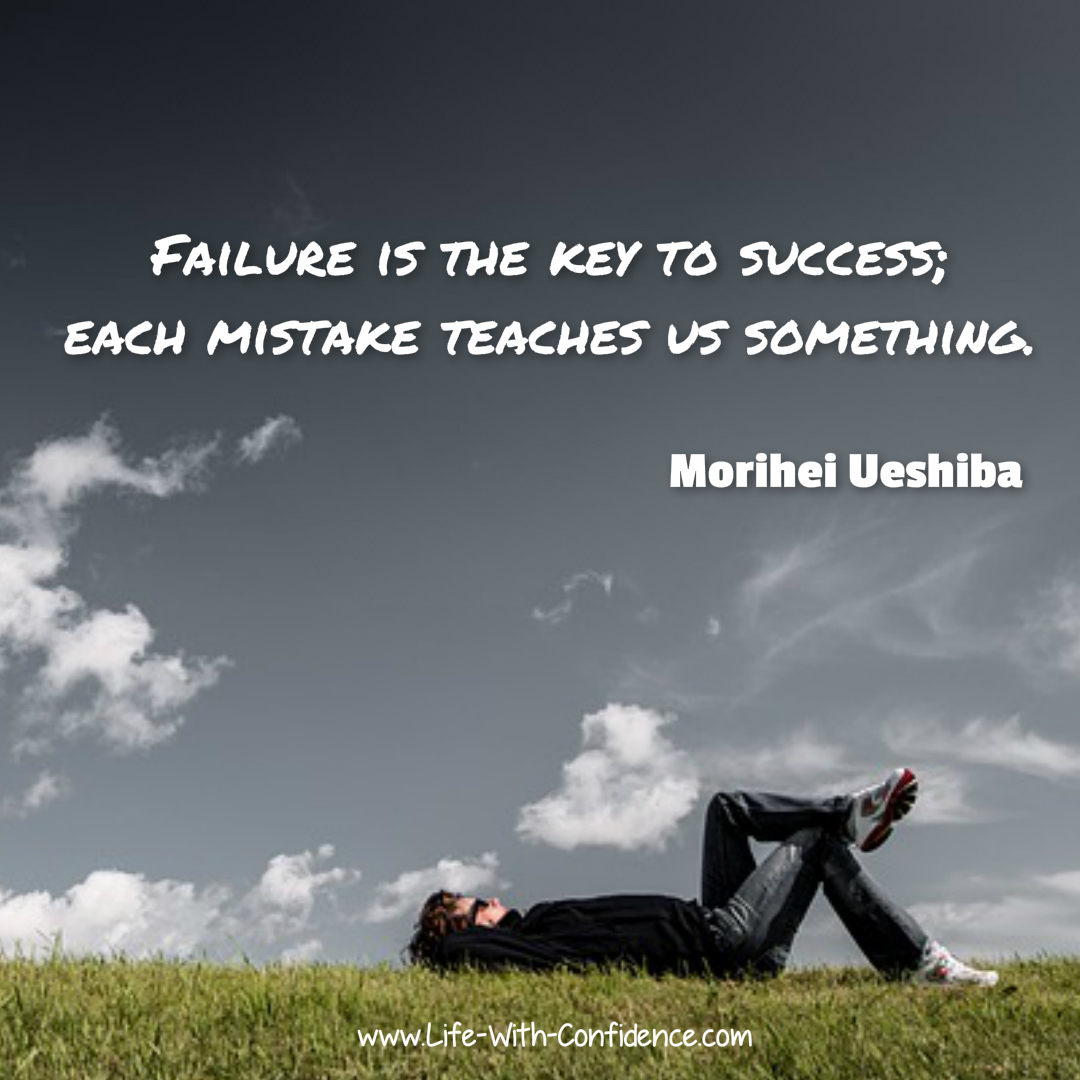 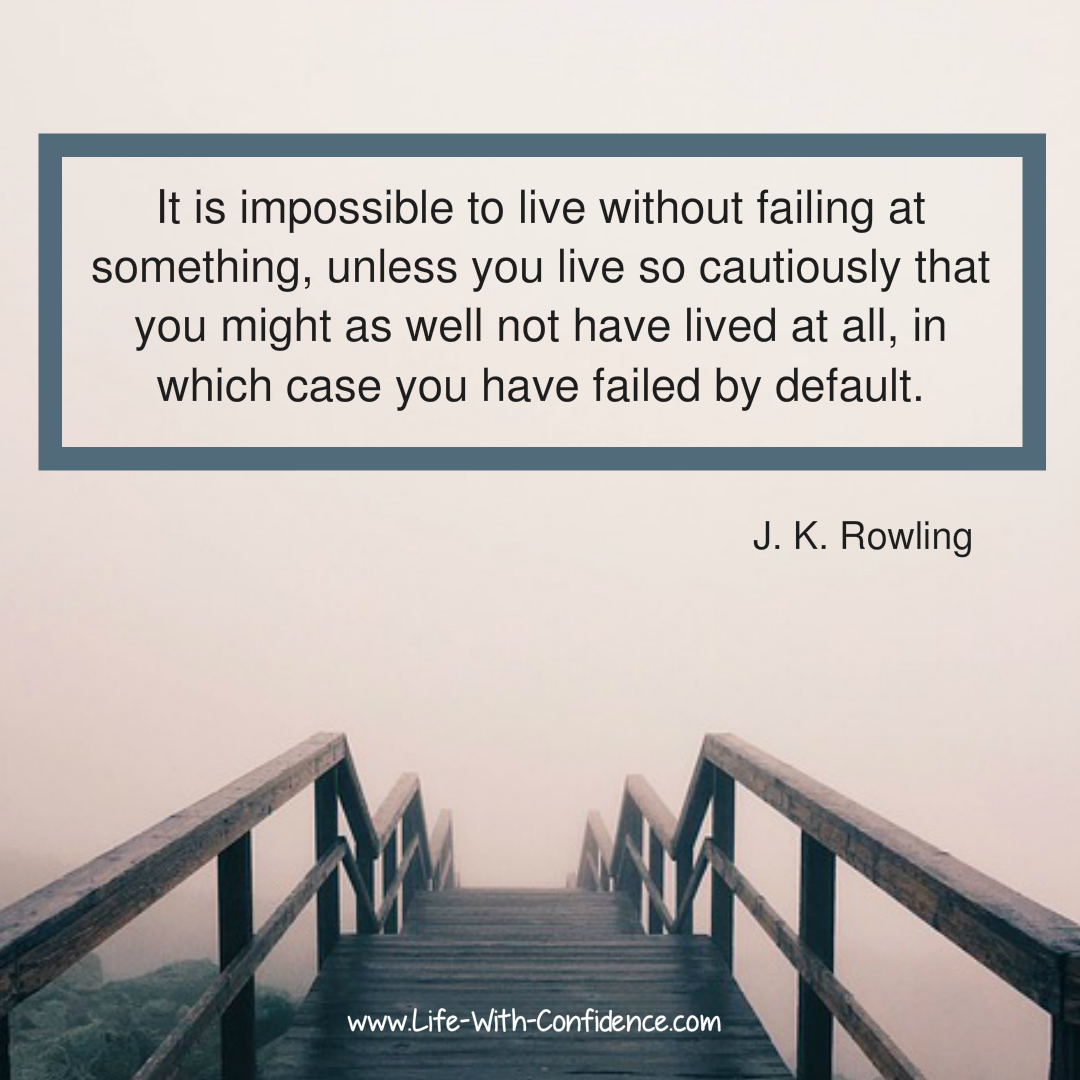 About the Author:
Catherine Pratt created Life With Confidence and she's a passionate explorer about confidence and valuing one's self.

For more detailed info, please see the About Me page.

What a different world it would be if we all felt confident enough to allow our true spirits to shine bright.

Disappointment is something we all have to face at certain times in our lives. How you react to those times will determine whether you're a confident person or a victim. Learn the three keys to turn disappointment into a positive.

The Fear of Making Mistakes

Learn why making mistakes is actually a good thing and not something to fear.

Are you feeling pressured?

The most effective way to deal with this emotion.

If you doubt that you can achieve something then motivate yourself by reading these stories of people who didn't let anyone tell them, "You can't do that".