The Bad Habit of TV -
What Are You Really Using It For? 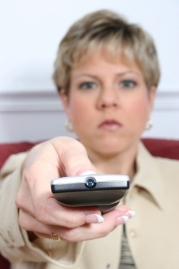 The bad habit of tv, where we watch way too many hours per week, is something many of us don't even think about anymore. The TV is just something we automatically turn on, or some people apparently never switch off.

It's a fact that on average, we watch about 4.5 hours a day which works out to be 31.5 hours per week. That’s about the amount of time you would spend at a part time job.

Add in the amount of time you spend watching YouTube videos or Netflix or playing video games and it's a large portion of your life that has mindlessly slipped away.

Wow! That’s a massive amount of time lost and most of us don’t even realize it.

Is this really how you want to spend your life? On your deathbed, do you want to have that horrible realization that you never really lived because you spent so much of your life watching tv?

Don't get me wrong. There’s nothing wrong with watching TV in itself.  The problem occurs when we do it mindlessly out of habit, or because we’re using it as a crutch to avoid dealing with certain emotions, or because it's become an addiction.

The key is to be aware of what you're doing and why. To live a life of confidence, you need to be intentional about how you're spending your time.

So, here’s a challenge for you, before you turn on the TV the next time, ask yourself, “Why am I turning this on?” 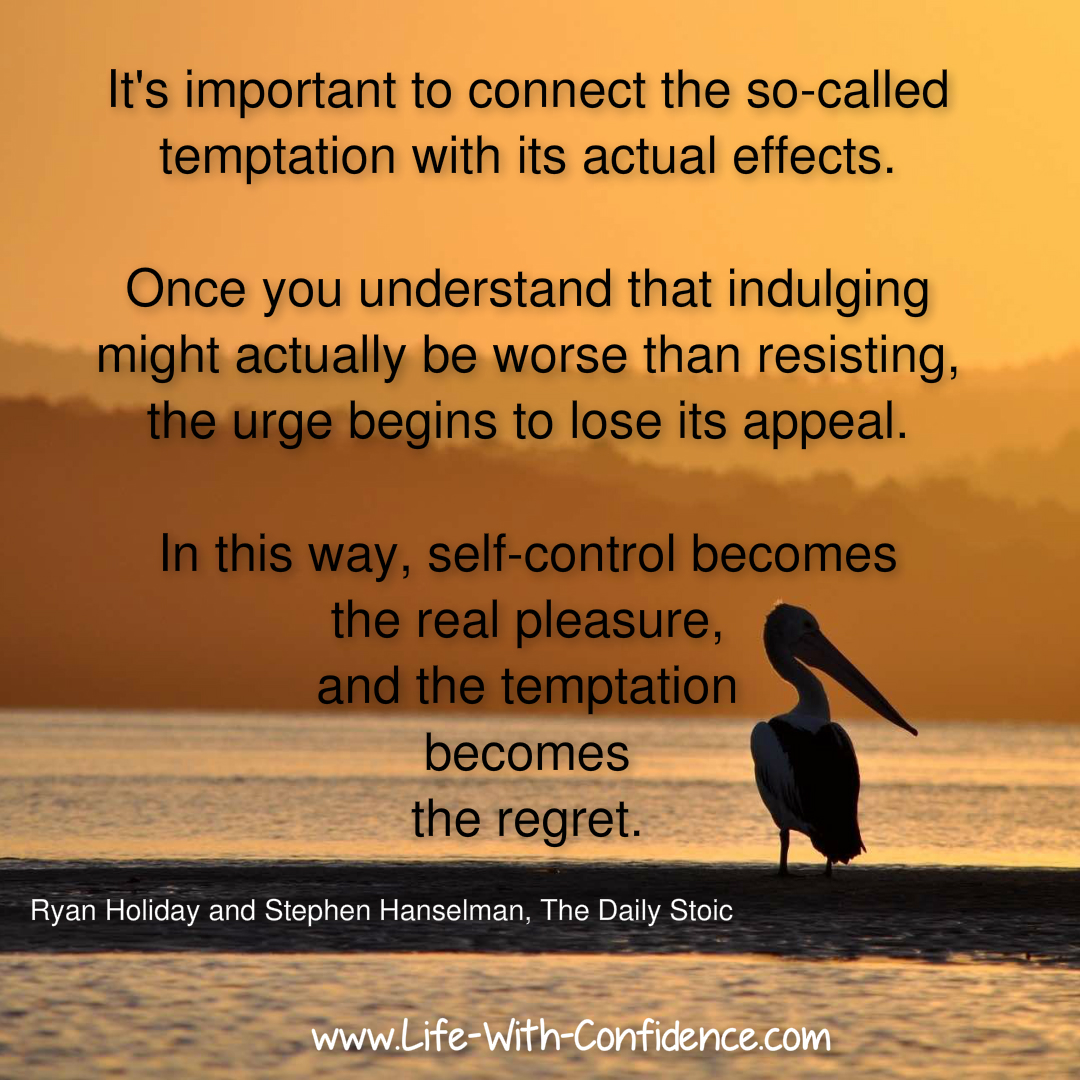 Has TV Become a Bad Habit For You?

You might believe that you watch tv with the simple intent of wanting to relax or to watch a specific show. But, are you really?  Many of us will turn on the TV as soon as we walk in the door because it’s that bad habit we don’t think about. It's become as automatic as taking off your jacket and shoes when you enter your home.

If you think about it, are there times when you suddenly realize:

It seems crazy that we work so hard at a job so we can come home and stare at a screen for hours and not even remember what we watched.

If this you, then it may be time to ask yourself, “What am I really using the TV for?”  If you’re honest with yourself, it’s not because you just can’t live without knowing who was voted off Survivor.

If you want to see if it's become an addiction for you, all you have to do is make the decision to not watch any TV (this includes streaming on your laptop or iPad) for a set amount of time, perhaps a week. See how hard it is for you to do. If you can do it easily then it's not an addiction but more a mindless habit.

At this point, you can make the decision if you want to continue spending your time this way or choose something you'd enjoy more. The point is that by becoming aware, you create choice and options for yourself.

Who's Controlling Your Mind?

"If a person gave away your body to some passerby, you'd be furious. Yet you hand over our mind to anyone who comes along, so they may abuse you, leaving it disturbed and troubled - have you no shame in that?" Epictetus

I came across this quote in the book, The Daily Stoic: 366 Meditations on Wisdom, Perseverance, and the Art of Living (#ad)

"Instinctively, we protect our physical selves. We don't let people touch us, push us around, control where we go. But when it comes to the mind, we're less disciplined. We hand it over willingly to social media, to television, to what other people are doing, thinking, or saying. We sit down to work and the next thing you know, we're browsing the internet. We sit down with our families, but within minutes we have our phones out. We sit down peacefully in a park, but instead of looking inward, we're judging people as they pass by.

We don't even know that we're doing this. We don't realize how much waste is in it, how inefficient and distracted it makes us. And what's worse - no one is making this happen. It's totally self-inflicted.

To the Stoics, this is an abomination. They know that the world can control our bodies - we can be thrown in jail or be tossed about by the weather. But the mind? That's ours. We must protect it.

Maintain control over your mind and perceptions, they'd say.

It's your most prized possession."

What you watch on TV, affects your thoughts whether you realize it or not. So, it's important to pay attention to what you're letting influence your mind.

Is It Worth The Risk For The Relaxation Effects?

Watching TV is a great way to relax and chill out after a tiring day at work. Isn't it?

When I went through this challenge, I discovered that watching TV didn't relax me like I previously believed. I found I was more wired, restless, and bored after watching hours of TV. I actually became far more calm and relaxed after I decided to stop watching so much TV and start doing other things.

It also freed up a lot of my time in the evenings which I could then use for things that actually made my life more rewarding as well as more relaxing. I also started sleeping better and waking up more alert. In fact, since I stopped watching so much TV, I've mentally become much more alert. TV seemed to put me in a dazed state which would take me a long time to shake off.

So, the question is, if we don't actually get much from watching TV, why do we seem unable to turn it off?

Uncomfortable To Turn Off The TV?

If you find it uncomfortable to break the habit of watching TV, it could be due to one of the following factors:

When you’re watching TV, you don’t have to deal with any of the problems in your life.  You don’t have to relate to those people you don’t want to talk to.  You don’t have to take action towards changing your life.  You can also ignore that niggling feeling in the back of your mind that you're not living up to your full potential. You can simply avoid absolutely everything that happens to be going on in your life right now.  If you’re feeling any emotions of anger or frustration, you can simply numb them by staring at the TV screen for a few hours.

You know you have things you should be doing.  TV allows you to procrastinate.  "I’ll just watch this show and then I’ll go exercise”.  Usually, you’ll keep telling yourself that until, “Well, there’s no more time, I’ll have to do it tomorrow.” except tomorrow never comes because of your handy TV excuse.

The problems are usually solved in half an hour or an hour on TV shows.  Sometimes they're funny and provide some laughter.  You have a routine you follow every week.  The character on the shows become like friends.  You look forward to seeing them.  You can also live vicariously through someone else’s life without having to take a single risk yourself.  Nobody wants anything from you and you can just zone out and watch some mindless entertainment.

Turn Your Brain Off

You’re tired of life and you just don’t want to think anymore.  It’s so easy to stare blankly at the screen and not have to think anything.  If someone asked you, you probably couldn’t even tell them what show you’re watching.

If you’re starting out trying to achieve a new goal or new Life Direction or just making some positive changes in your life, it can be scary.  One way to deal with the fear is not to deal with it at all.  This doesn’t solve the problem though and your fear will continue to build until you do decide to deal with it.

And you don’t know what to do about it or you just don’t have the energy to do anything about it. If you're in this state, the more you watch TV, the more listless you're going to become.

At this point, it would be far more beneficial to create an intention for yourself. This is simply to spend time exploring something that interests you.

To Avoid The Silence

A lot of people have the TV constantly on even when they're not watching anything simply because they don’t want to deal with the silence.  Do you find that you can't stand the thought of being alone or listening to your own thoughts?

If you do, you may find this quote gives you a different perspective. It's from Byron Katie's book called, I Need Your Love - Is That True?: How to Stop Seeking Love, Approval, and Appreciation and Start Finding Them Instead (#ad)

It's an excellent book.  If you're afraid of your thoughts, pick up a copy of this book and you'll be amazed at how quickly those frightening thoughts no longer have any control over you.  You'll get your life back.

There's Nothing Wrong With Watching TV...

There really is nothing wrong with watching TV as long as you're intentional with your viewing.

If you’re using it to avoid dealing with your problems or to avoid actually living your life then it’s time to become aware of your actions.

The problem with TV is that it’s just much too easy.  One quick push of a button on your remote and you’re suddenly immersed into a new and escapist world.  TV can be a very handy crutch.

It’s also addictive and it's purposefully designed to be addictive.  You want to know what happens to your favorite characters next week.  The shows are designed to get you hooked and you don’t want to deal with things so you end up not even thinking about what you’re really doing to your life.

One way to learn an amazing amount about yourself is to stop completely from watching TV for a set period of time. You’ll learn way more than you ever did by watching TV.   See if any of the above points suddenly become apparent.

Plus, think about it, when you’re 80 years old, do you want to look back at your life and know that the only thing you’ve learned is that you vaguely remember some of the reality TV show winners?

Or do you want to think back on your own life experiences and smile?

Ready to take the challenge?
The next time you go to turn on the TV, ask yourself, “Why am I turning this on? and "Is this really what I want to be doing with my life?"

If you need some help with this, check out TV Addiction: 22 Techniques to Overcome It.

One more important thought
to consider before you turn on the TV:

"It’s your life. Your LIFE!
Will you spend that life watching television
where some people pretend to be other people
who don’t even exist?"