Why do we keep them and how do you know if a friendship is unhealthy?

Do you have unhealthy friendships? Not Sure? Ask yourself this question right after you have spent some time with someone:


"Do I feel better or worse than I did before?"

I discovered this friendship test while I was waiting for the dentist the other day. I found it in an old "Oprah" magazine in an article called “Trust Your Gut” by Francine Prose. I thought it was a great technique to take a reality check on any relationship whether it be a boy/girlfriend, friends, or professional associations. 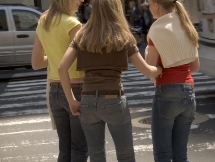 How many times have you spent time with someone only to feel completely drained afterwards? Or you find that they’re constantly putting you down even if it’s very subtle how they do it? Or you're part of an organization and you find that you just dread the nights that you have to go to their meetings. The question that comes out of this is why do we keep hanging around these people even after we realize they're unhealthy friendships?

The reasons can be varied but probably some if not all of the following emotions are coming into play. Once you’re aware of why you might be hanging on to destructive relationships, it can be easier to finally let them go.

1. You Want to Help
It's human nature to want to help people whenever you can. There's a fine line between helping and being a co-dependent for someone. For example, if you have a friend who just calls to tell you how bad her life is and never wants to hear how things are going in your life, this is most likely a draining and unhealthy friendship for you. You may also start to resent that she never has time to listen to you. But, then that makes you feel guilty because you feel you should help her.

In situations like this, even though your intention is to help, you’re not because you're encouraging their negative attitude by giving them the attention they seek. If you're able to provide constructive advice which they listen to and do attempt to change their situation, then you should feel better after talking to them. You've helped them. If you’re just listening mindlessly to the same thing over and over, you’re not helping and you’re bringing your own mental attitude down. Be aware of whether you're helping or enabling someone.

2. You Want To Feel Needed
Everyone wants to feel like they provide value to the world. If we're there for our friends, it makes us feel like we’re valuable. After all, they need us, right? But just like as in Point #1, we may not be doing a lot of good. And if that feeling of being needed is dragging down our positive mindset, then it’s a problem.

I had a friend for awhile who was in the process of planning her wedding. It quickly became very apparent that she only wanted me around to help her do all the wedding chores as her bridesmaids weren’t able to help her. It was the only thing she was interested in and wasn’t willing to do anything else other than wedding plans. And, then after the wedding, I was dumped.

It was a hard lesson to realize I’d been used by someone who I thought was my friend. There's a fine line between being helpful and being used. When the situation turns out to be that you've been taken advantage of, it's far more damaging to your self confidence than any feelings of being helpful you could have had.

That's why it's important to pull the plug on any unhealthy friendships where you're just being used for what you can provide whether that's material objects, your time, or even just a listening ear. You deserve a relationship in which both give and take occur. If that's not happening then it may be time to move on.

3. You’re Afraid You Won’t Have Any Other Friends And You’ll Be Alone
It's actually better to be alone and open to starting new friendships rather than  spending time with someone who's destructive to your self esteem. Unhealthy friendships can do enormous damage to your confidence levels without you even realizing it. Don't worry though. Once you dump the negative friends, you'll find your own attitude changes to be more positive and you won't be alone for long because you'll now be attracting upbeat people into your life. Once you attract those people who are sincere in their desire to bring out the best in you, you'll keep attracting even more friends. True friends who will be there for you, no matter what.

4. Regret
You worry that you might regret your decision to move on. Once you dump unhealthy friendships, you can't get them back, right? What if you need your friend at some point in the future or they might become famous later or be important somehow or just something? Maybe things will change and you'd regret dumping that friend. You just don't know. All you know is, you don't want to do something that you might regret later. Ever have these thoughts? Being protective of your own mental attitude and even your time, is not something to have regrets over. If you think about it, you'll probably regret that you didn't get rid of the unhealthy friendships sooner. By losing the negative, you then open yourself up to allow the positive to enter your life.

5. Desire To Be Liked
Did you know that cults who want to recruit members play on this desire? They know it's human nature that you want people to like you so you’ll do whatever it takes to get someone to like you. Even if that means sacrificing your own self esteem. It's just not worth being liked by someone who isn't bringing out the best in you. The most important person for you to like is yourself and if you're hanging around people who don't want the best for you, you're not going to be liking yourself very much. Unhealthy friendships are definitely not going to make you happy.

6. It’s Hard To Break Up With Friends
It’s hard to break up with friends even when they're unhealthy friendships. What do you do, have the “it’s not you, it’s me" talk? Seriously, it’s not always easy. They call, you talk to them, they invite you somewhere, you feel it’s rude to say, “No”, so the cycle continues. You know they're unhealthy friendships but you just don't know how to end it.

First thing is to be strong and to believe in yourself that you deserve the best in relationships. Then, just start saying "No" when they call. It may be tempting to just not call them back when they call but you wouldn't want to be treated that way, so don't do it to someone else. The best policy would be to be completely honest with them and tell them how you're feeling. It may not be easy to be so honest but it's the best way. And, who knows, if you tell them something like, "I don't want to go out drinking every Saturday night anymore" they may respond that they don't either. They were just doing it because they thought you wanted to. You may find that an unhealthy friendship turns into a much healthier one just by being completely honest.

7. You Feel You Have To Out Of Loyalty
You’ve been friends since high school. How could you break up with someone you've been friends with so long? Or they're your brother's friend so you feel obligated. People change a lot over the years and start going in their own direction. If you decide to change to become more positive and confident and your friends are stuck in old thought patterns, you're keeping yourself locked into a way of life you no longer want. You need to ask yourself, why do you keep the friends that are no longer helping you to achieve your goals? To be the best you can be, you need to move on from the unhealthy friendships.

Why You Need to Be Aware of Who You're Associating With

Friends should be there to support you and to enrich your life. If they’re bringing you down, it’s time to move on. The people you choose to surround yourself with should also be great spirits who inspire you to be the absolute best you can be.

If you have unhealthy friendships or groups in your life, ask yourself "why" and then as soon as you can, let them go. Life is too short and you have so much to offer the world to be limited by the small thinking people you'll find all around you.

The key point is to be aware of who you're associating with. If you're around negative people all the time very likely you'll find that you start to think this way too. If you're with positive, excited to be alive people, that will rub off on you. It's an easy way to build confidence just by being aware of what kind of people you surround yourself with. Unhealthy friendships take a lot of energy and really just aren't worth it.

Remember this the next time you think about
not moving on from unhealthy friendships:

A friend is a present you give yourself.
Robert Louis Stevenson

What kind of gift are you giving yourself?