Body Pains - How Your Body May Be Dealing With Your Emotions 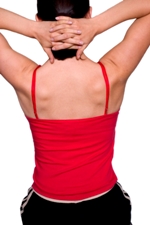 I had a back ache. Right hand side, half way up. I’d had it for months. Pretty much since I changed jobs. I’d keep trying different things to make it go away. I thought maybe it was my shoes, the way I was sitting at my desk, maybe I had a virus. I tried different pilates exercises, bought new runners, tried different vitamins. Still, it wouldn’t go away. I was thinking I was going to have to take the last resort and go see a doctor. I don’t like to see doctors for something vague like, “my back hurts” but it was so bad I even called to make an appointment. The day I called they were closed since it was a Friday and I’d have to wait until Monday. In a way I was relieved because I knew there had to be an answer that I could do myself without taking medication.

At about the same time, I kept seeing a book being mentioned in different places about how to heal your life. It was one I’d read about two years ago but back then I hadn't been at a place in my life where I could appreciate the wisdom this book was trying to share. There was just something that made me want to read this book again so on the same Friday that I called the doctor’s office, I went and bought a copy of this book and started reading.

In this book, there was a section on Forgiveness that caught my eye. I’d just written an article on forgiveness so I was curious as to what she said about it. She described an exercise which she said would dissolve all the emotions like regret, sadness, hurt, fear, guilt, blame, anger, resentment and even revenge. Couldn’t hurt to try it. When I closed my eyes to perform the exercise which involves visualization of certain people in your life, the person I thought I would see didn’t arrive. Instead, it was someone I hadn’t expected at all.

The second they appeared in my visualization though, I knew what she discussed in her chapter was true. I had resentment for this particular person. I actually had huge resentment but also guilt because I felt like it was wrong to be feeling that way. I decided to continue on with the exercise. When I was done, I opened my eyes. The pain in my back was gone. My first thought was “This is too weird,” but it was amazing to have the pain gone. I almost didn’t believe it. I kept expecting to feel it. I thought it would be back later or even tomorrow. The next day came and there was still no pain. None at all.

I haven’t had the pain in my back since I did the exercise. I’ve had minor twinges but I realize it happens whenever I start to feel resentment for this person again.

Talk about the power of emotions. How many of us understand that what we’re feeling can manifest itself into body pains? Wouldn't it be amazing if we never had to suffer through another pain in our body if we just took the time to understand what it was trying to tell us? Imagine going to the doctor not for medications but to find out what issues are trying to get your attention. It's a totally new way of looking at what ails us. Anything from the backache I had to headaches to seizures to even cancer the author says in her book. Pretty powerful stuff.

Even if you don't believe completely that emotions can manifest themselves as body pains, you can see how if you're feeling intense emotions you might be tensing up in certain areas which could cause pain as well.

In the book, she says you can tell yourself you're not going to feel a certain emotion or face a certain issue but our bodies pick up on the feeling anyway and will give us pain until we deal with it. You may try to escape the emotion but there’s no way to escape your body. It’s a new way of realizing how powerful our emotions are whether we acknowledge them or not. How many pains do you have that are really emotions not being acknowledged?

It’s a fascinating book and she goes into detail as to what pain in each part of your body may be telling you. She also provides a number of exercises to help move past any emotions that may be manifesting themselves as aches or even as bruises or cuts. If you’re interested, the book is:

You Can Heal Your Life (#ad)

I really wouldn’t have believed something so simple could have such a huge effect if I hadn’t tried it myself. It truly does show that our emotions have far more power than we give them credit. It also shows it’s important to deal with emotions as soon as you feel them and not try to ignore them or deny them. Process the emotions as you become aware of them and then you can move past them. Your body will thank you for it.